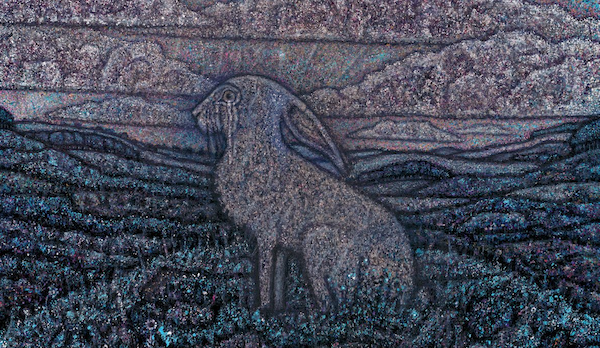 “Our new album The Hare’s Lament is a collection of traditional songs that we’ve arranged in a contemporary way, two are hare-hunting songs but the themes are anti-blood sport and sympathetic to the hare … who always gets away … the symbolism is important for us”.

The Hare’s Lament of Brían and Diarmuid Mac Gloinn

Since the release of their debut EP ‘Rose & Briar’ in 2015, brothers Brían and Diarmuid Mac Gloinn who make up the Dublin-based duo Ye Vagabonds have been turning heads on the Irish music scene.   In 2017 they released their self-named debut album, a beguiling set of timeless self-penned originals sitting seamlessly beside the poignant ‘Lowlands of Holland’.  Their music is a compelling collection of harmony-rich folk, influenced by Irish traditional music and Appalachian song, all masterfully combining to create a profoundly unique raw sound.  Their second album ‘The Hare’s Lament’ is due for release on 22nd March.

Brían and Diarmuid grew up playing music together, from their childhood in Carlow to their arrival in Dublin, busking, eight years ago.  Singing in both Irish and English, the brothers combine their own songs with traditional compositions.  “The song-writing is a collaborative thing.  Diarmuid is the words man and my input is with the harmonies and adding or changing the melody or the arrangement.  We also pick up songs from archives, old books and recordings. Four of the tracks on the new album are Arranmore songs as gaeilge and the others are from the Ulster singing tradition.  The ten songs on the new album have been in circulation for a great number of years, successively renewed and recharged by each generation of singers.  There is no single definitive source or version associated with any of them”.

Their link with Arranmore, the island off the west coast of Co. Donegal, is strong as Brían explains, “Arranmore is our family home, it’s the birthplace of our mother and it’s where our mother and father have now returned to live along with our sister and her family.  But Stoneybatter in Dublin, where we both live, is our neighbourhood”.
Ye Vagabonds distinctive sound is reminiscent of the exquisite harmonies and intricate musicianship of the legendary Planxty with rich influences from the current contemporary, innovative and vibrant Irish folk scene; with a special nod to their pals Lankum (formerly Lynched).  Their exquisite sean-nós voices, expertly interwoven with their violin, bouzouki, guitar and mandolin playing.  For their Paris concert, the brothers will be joined by Alain McFadden on harmonium and vocals.  “We played with Alain in Twin Headed Wolf, he’s a fabulously flexible musician who covers all the extra bits of the band that we need and can play literally anything we give him”.
In 2018, the brothers signed to the iconic Rough Trade record label who they describe as the superstars of the record label world.  “Geoff and Jeanette are legends and they’ve given us total artistic licence with the new album.  We’re signed to their new River Lea folk division which has recently had great success with Lisa O’Neills new album – we’re delighted to be working with such great people and it means that our music will get distributed world-wide and get fabulous media exposure”.  In 2018 also they were nominated for the prestigious BBC Folk Award and featured in the RTE Radio 1 Folk awards.
Details are important to the Mac Gloinns as their luxuriant album covers artwork illustrates, “Our debut album cover is set in a birch forest which is important for us and includes a fox, a stag, an owl, a squirrel, creatures that symbolise ourselves and the musicians who played on the album.  At that time we were also really into the Elder Futhark, Nordic runes, which are also in the painting.  The artist is our friend Conor Campbell, who’s colour blind so the colour composition of the painting is quite surreal as oranges, reds and browns are the colours to which he’s most sensitive.

Ye Vagabonds have performed in France several times as headliners as well as opening for groups including The Villagers, Glen Hansard and Lisa Hannigan.  “Funny” Brian laughs, “but we had our worst ever gig in France in Rouen a few years back – it’s become our marker for how bad things can get!  We were performing in a really swanky venue and just before we went on we had to do a bizarre live radio interview with an interpreter.  Then suddenly the venue manager rushed in to get us to go on-stage and he led us into this vast empty concert room.  And there wasn’t a single person in the room!  Not even some pre-show music to create an atmosphere – just a dead room.  And we had to start performing, playing into nothingness, row upon row of empty seats.  It was just so surreal.  By the end of the concert some people had come in – but it’s our benchmark for the worst gig.”

Ye Vagabonds will bring their intoxicating, evocative brand of music to the Centre Culturel Irlandais on Sunday 17th March as part of the Chapel Sessions, where they can be assured of an audience… and an appreciative, informed one at that …. complete with pre-show music.